How to inspect surface data 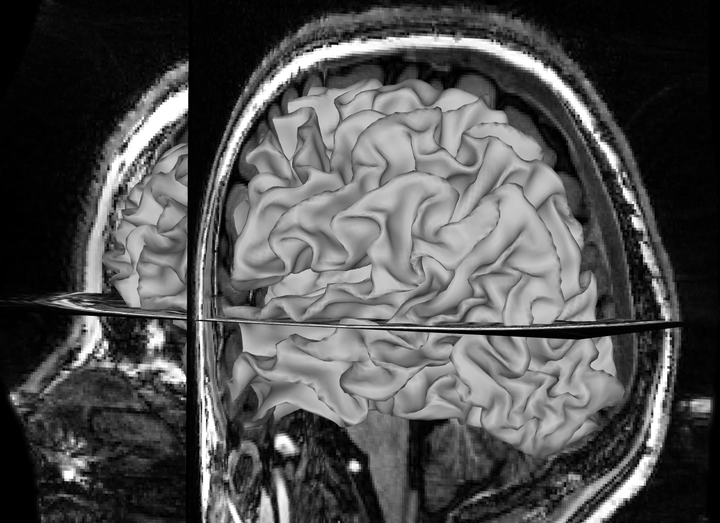 written for the Diedrichsen Lab & Brain and Mind Institute.

This guide describes some useful checks of different types of image data. In particular, it focusses on checking reconstructed surfaces from anatomical data, registration and normalization checks as well as final inspections of group estimates of functional activity.

To check that surfaces were reconstructed correctly and match the T1, pull up workbench:

Open the native space T1 (for example sub-01_T1w.nii) and the pial surfaces for the left and right hemisphere (sub-01_space-32k_hemi-L_white.surf.gii & sub-01_space-32k_hemi-R_pial.surf.gii ). In the montage tab, click on All (is set to Montage by default). You might have to also click On for the T1 image in the overlay toolbox to show the T1.

You should now see the T1 image and reconstructed pial surface. Rotate the image to see whether the surface is aligned with the sulci in the T1. An extreme mismatch would look like this:

A subtler mismatch of the right hemisphere could look like this:

And here is a perfect match between pial surface and T1 image:

To check whether your functional data makes sense, you can average the activity across all your subjects for each task or task condition. For visualising the group average in surface space, it is useful to save it as a cifti file. You can find a good introduction to cifti files and some resources to get you started here.

Look at some contrasts you are familiar with and where you know what to expect. For example, a left hand movement task should give you high activation in the right M1 hand area:

And the right hand movement task should give you left M1 hand area activation.

You can also check visual tasks, where you would expect activation in the visual cortices:

These inspections should confirm that on average, you are seeing activity in the areas that you would expect for the different tasks.