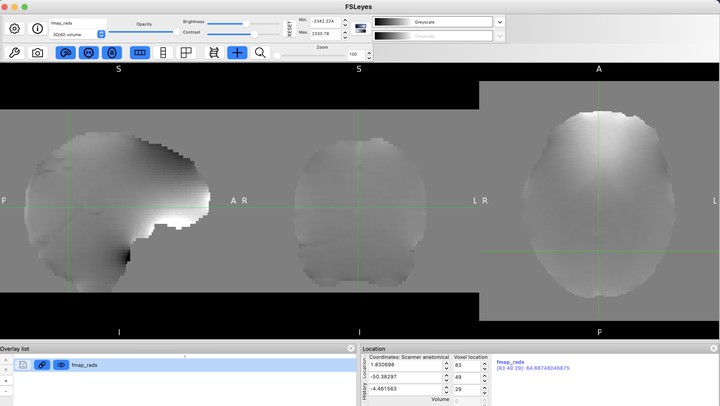 written for the Diedrichsen Lab & Brain and Mind Institute.

Here I will describe the steps to create and apply fieldmaps to correct for epi distortions. I will focus particularly on the things you need to check in order to make sure you have done each step correctly, as there are a few pitfalls when doing the fieldmap correction.

For ideal results, I would recommend preparing the fieldmap and performing the combined unwarping and epi registration with the FSL FEAT tool. Once you have obtained the fieldmap and checked that the unwarping is correct, you can apply the fieldmap to any epi runs collected within the same scanning session (as long as the subject has not been taken out of the scanner between the fmap acquisition and the epi run). You are free to preprocess the epi run with the tools of your choosing (SPM, FSL, etc.) before applying the unwarping using your fieldmap.

This guide will work for fieldmaps acquired on a SIEMENS scanner. If you have another scanner type, then most of the steps are applicable, but the tool fsl_prepare_fieldmap for creating the fieldmap will not work. For help with non-SIEMENS data, have a look at this website.

Which images do I need to produce a fieldmap?

You will usually have two magnitude images and one phase image. To find out which is which, pull them up in your favourite image viewer and compare them to the images described in this article.

To ease use of fsl tools, reorient the images to fsl-standard.

Next, you need to skull-strip the fieldmap magnitude image. This is so that we can use the magnitude image as a mask to later exclude suprious voxels outside of the brain from the phase image.

This will take a few minutes to run, so submit the command and go for a coffee break.

fsl_anat has created a folder fmap.anat, in which you can find the bias-corrected magnitude image. The image is called T1_biascorr.nii.gz. Ignore the naming of the file, this is because fsl_anat assumes that you have passed it a T1 image.

Now we’re ready to skull-strip. I use the fsl tool BET (brain extration tool) with the “-R” flag to get a recursive skull-stripping.

BET is slightly more lenient than we would like it to be in this case. Usually, we want to make sure we definitely include all brain voxels into the skull-stripped image. But for the fieldmap, we want to be very conservative and exclude any non-brain voxels from the image. That is because the we don’t want spurious voxels in the phase image that lie outside of the brain to affect our fieldmap. And the fieldmap is going to be extrapolated, so even if we exclude brain voxels, they will be included into the fieldmap.

Once you have chosen your best skull-stripped image, set this as the variable chosen_brain_extraction.

To abide by the naming convention that FSL’s FEAT needs, we rename the chosen skull-stripped magnitude image fmap_mag_brain.nii.gz. Your non-stripped magnitude image needs to be named fmap_mag.nii.gz (the .nii.gz suffix is missing in the code because FSL tools automatically assume that images have that ending. If yours end in .nii, then try running gzip ${output_dir}/fmap/fmap_mag before applying the FSL commands.

(You don’t have to use fslmaths for this operation, since we are not doing anything to the image other than copying and renaming it. You can use cp for this operation or simply copy and rename in whatever file manager you use. I just got into the habit of using fslmaths, since you won’t need to specify the file ending.)

Now we will pass the phase image, magnitude image, and skull-stripped magnitude image to fsl_prepare_fieldmap to create a fieldmap suitable for FEAT saved in rad/s.

The last parameter in the fsl_prepare_fieldmap command is the echo time difference of the fieldmap sequence and depends on your fieldmap acquisition. Find this parameter out from your scanner operator (defaults are usually 2.46ms on SIEMENS, but not always - as in the case below).

Inspect your fieldmap (fsleyes ${output_dir}/fmap/fmap_rads &) and make sure it looks ok. It should look something like the fieldmap shown in the second figure of the FSL distortion correction practical.

Once you have created your fieldmap, you can use it to correct your epi data with FSL’s FEAT.

If you do this for the first time, pull up the FSL FEAT GUI and the User Guide, then set the analysis to ‘First-level analysis’ and ‘Preprocessing’. I would recommend pulling up the going through each required field and reading the ‘balloon help’ window that pops up when you hover over the field. Select the right scans and fill in your scan parameters for each window.

Fill in the effective echo spacing and the echo time. The balloon help field will tell you more about both parameters. To find these out for your sequence, a good starting point is having a look in the scanning protocol (you can get that from your scannner operator). This article will also help you understand and locate the parameters. Note that if you have an accelerated sequence, the effective echo spacing is the echo spacing divided by the acceleration factor. To find out if you have an accelerated sequence (e.g. GRAPPA acceleration), refer to your scanning protocol or ask your scanner operator.

Example page of a scanning protocol. GRAPPA parameters are found in the bottom left corner.

If the fieldmap correction has gone wrong (too much or too little correction), the effective echo spacing is one of the first parameters to check.

One parameter which you will likely have to try out is the unwarping direction. The PE direction for the example data was the z dimension. But it is not immediately obvious whether you have to unwarp in the plus or minus z direction. Therefore, run the FEAT separately for both directions and then compare the results. You can tell from visual inspection whether the unwarping has made the distortions better or worse. Visual inspection of the distortion correction is described below.

After you have filled in all of your parameters and data paths for the preprocessing, save the preprocessing design file (click Save in the GUI). This will give you a .fsf file that you can load into the FEAT GUI again to process this or other runs. With the .fsf file, you can also run the preprocessing from the command line, by running feat design.fsf. The design file will also help script your analysis once you have established a working pipeline.

Then, after creating your fieldmap and all other necessary images for the preprocessing, you can create a subject-session-and-run-specific design file and fill in all the identifiers:

Then you can run the preprocessing:

You need to make sure that the paths in your design file are appropriate for the server you want to run your analysis from. That means, if you create your design file locally, with the data server that contains your data mounted and then try to run the analysis from the robarts server, the analysis will fail. That’s because locally, your paths begin with something like ‘/Volumes/diedrichsen_data$/data/…’, but on the robarts server your paths begin with ‘/srv/diedrichsen/data/…/

You can check that your design file has the correct paths by pulling up the FEAT GUI on the robarts server (or wherever you want to run your analysis from), then loading the subject-session-and-scan-specific design.fsf file and clicking ‘Go’. FEAT will show you an error message if your paths are not correct. If your analysis is set up correctly, a webbrowser window will open and your analysis will start running.

I would advise you to first make sure the fieldmap correction has worked correctly on an example subject (using the steps below) and then moving on to scripting the analysis for all subjects, sessions and runs.

The output from the preprocessing is found in the output folder you set (GUI field ‘Output directory’) with the suffix ‘.feat’. For example, for my example design.fsf file, the output is located in /srv/diedrichsen/data/Cerebellum/Pontine7T/pilot_studies/caro/derivatives/sub-02/ses-1/func/run-01.feat. The distortion-corrected data is filtered_func_data.nii.gz

We want to make sure that the fieldmap correction has worked correctly, so we are going to pull up the report.html. Point your browser at the file (open /srv/diedrichsen/data/Cerebellum/Pontine7T/pilot_studies/caro/derivatives/sub-02/ses-1/func/run-01.feat/report.html) or open the folder and double-click report.html. In the webbrowser, click on ‘Registration’ and then ‘Unwarping’.

Fieldmap in colour. The first row shows a colour map of the fieldmap. This should be fairly uniform, except in the inferior temporal and frontal areas.

The example data used here was acquired with a OP coil (occipital-parietal coil). This coil is focussed on the back of the brain (posterior areas). Therefore the signal loss at the frontal areas is particularly bad and those are ignored more than usual. If you have a wholehead coil, signal loss in the frontal areas should not look this bad.

In the third row you can see by how much the voxels are shifted. First, look at the range of voxel shift. This should be between +/- 3 to +/- 20. If the shift has an exorbitant high range, then something went wrong. Check the calculation of your effective echo time (did you remember to divide by the PE direction acceleration factor?) and check that the fieldmap you created is in radians per seconds (rad/s). Usually, if the voxel shift range is really high, then something went wrong with the units of the fieldmap or the parameters you are putting in for the echo time spacing. However, the range indicates the maximum voxel shifts. Looking at the example shift map, you can see that only very few voxels in the frontal areas were shifted by this maximum amount. All other voxels were shifted by only a few (perhaps 1-5) voxels.

For closer inspection, pull up these images in fsleyes. Pick an area that experiences a large voxel shift (but not one that has been ignored due to too much signal loss!). Then flip between the images and the structural image to see whether the distortion correction brings the epi image closer to the ‘ground truth’, i.e. the structural image. Below, I describe how to do this for cerebellar areas.

Registration of initial_highres to highres with and without fieldmap correction.

Finally, this is where you can directly compare the registration results with and without the fieldmap correction. The white matter edges (red lines) should align better with the GM-WM boundaries on the greyscale image after applying the distortion correction.

For a more detailed comparison in fsleyes, follow the instructions at the bottom.

Note that if you have not used an sbref image (see above), then these images are titled ‘example_func to highres’.

The cerebellum is especially vulnerable to distortions due to B0 Field inhomogeneities, because it is located close to the air-tissue interfaces that cause magnetic disturbances. To check that the unwarping did a good job for the cerebellum, pull up the structural image, the fieldmap-corrected epi image and the uncorrected epi image (both registered to the structural):

(In my data, I am using the sbref image - called ‘initial_highres’ by FSL - to get a better registration of the epi data to the structural. If you don’t have an sbref image that is different from your epi images, then you want to pull up example_func_distorted2highres.nii.gz and example_func2highres.nii.gz instead.)

A lot of the content covered here I’ve learned during my time participating in and later teaching on the FMRIB FSL Course. I highly recommend checking out their lectures, practicals and tutorials - and attending in the course if you find yourself in Oxford!